12-year-old on a mission to save Africa’s most unusual animal, the okapi, an interview with Spencer Tait

Anyone who says a kid can’t change the world hasn’t met Spencer Tait.

At the age of five Spencer had his first encounter with the Congo’s elusive okapi at the Milwaukee Public Museum. Spencer—now 12 years old—describes that encounter as ‘love at first sight’. He explains that while the okapi “looks like a mix between a zebra, horse, and giraffe […] it’s really only related to the giraffe.”

Dwelling in the Congo’s deep rainforest, the okapi is so adept at hiding, that science only discovered the large mammal at the opening of the 20th Century. Today, researchers are still eluded by the okapi: the first photos of the animal in the wild were only captured two years ago. The okapi is classified as Near Threatened by the IUCN Red List, and is threatened by deforestation, the bush meat trade, snares, and destabilization due to civil conflict. No one really knows how many okapis survive in the wild, but estimates range from 10,000 to 50,000.

Seeing the okapi at the museum led Spencer not only to learn all about the okapi, but also to find out what was threatening the animal’s survival, including the long civil conflict in the Democratic Republic of Congo, the okapi’s home.

Most kids—and adults too—would probably leave it at that, but not Spencer. His passion for the okapi led him to start a one-kid-campaign to raise money and awareness for the okapi. With the help of his father, Bill Tait, Spencer built a website www.savetheokapi.com. In 2008 he set a goal of educating 1,000 people about the okapi. In that year alone, his organization was mentioned in a school newsletter, on a local radio station, and Spencer himself made an appearance on a local Milwaukee TV morning show to talk about the okapi. Last year his organization was highlighted in the Brookfield Zoo newsletter (with a circulation of 90,000 families) and was featured on ‘Kohl’s Cares for Kids’ program.

But Spencer hasn’t just increased awareness about this rare and beautiful animal, he has also succeeded in raising funds. With his website, Spencer raised 500 US dollars for okapi conservation, which he donated to the Brookfield Zoo in Chicago. The zoo not only houses a number of okapis, but coordinates the okapi ‘Species Survival Plan’, which works to breed okapis in captivity and aid conservation efforts in the wild.

This year, Spencer hopes to teach 10,000 people about the okapi; I have no doubt he’ll succeed!

Mongabay: Can you tell us about the okapi?

Spencer Tait: Yes! The okapi looks like a mix between a zebra, horse, and giraffe, but it’s really only related to the giraffe. They were discovered about 100 years ago and they only live in a small region of Africa.

Mongabay: What is it about this rare and little-known animal that got you so interested?

Spencer Tait: I first saw an okapi at a museum and once I saw it I feel in love with it because it’s different. I’ve also been interested in learning more about unusual things that not everyone knows about. I started to do some research and the more I learned, the more interested I became.

Mongabay: Why do you think it’s important to save species like the okapi?

Spencer Tait: Well, the okapi really can’t help themselves, so they need humans to get involved or they’ll become extinct. Most people have still never heard of an okapi, but I want to change that. It’s important for more people to learn about the beauty of an animal, before they go away forever.

Mongabay: How did you raise 500 dollars for okapi conservation?

Spencer Tait: I built a website(www.savetheokapi.com) and began accepting donations for the Brookfield Zoo in Chicago. We promoted the website through friends, family, and others, including Zig Ziglar (the person who originally inspired me to make the website). It took us most of summer 2008 to raise the money and we presented the Brookfield Zoo with a big check as soon as we reached the $500 mark.

Mongabay: You have a goal to educate a thousand people about the okapi. How is that progressing?

Spencer Tait: My goal for 2008 was to educate 1,000 people about the okapi and that went really well. We were lucky enough to have a TV appearance on the Morning Blend (a small TV show in Milwaukee). But actually this year are goal is to reach 10,000 people and so far it’s going really well.

Mongabay: What can people—both kids and grown-ups—do to help the okapi?

Mongabay: What advice would you give kids who like yourself are interested in conserving endangered species, but are not sure how to start?

Spencer Tait: You pretty much do what the last question I answered said, learn about the animal, get the word out, and for the last thing you could join an organization, it doesn’t even have to be just about the animal it could be about the environment around it too. But that’s not the only thing: you could also build a website like me, you could even just put a little sign in your yard, anything to get the word out so other people can learn about it and do the same thing as you. If it’s not working out for you remember this, follow your heart, don’t be afraid, and if you set a goal make sure it’s a big goal because if you set small goals then you’re aiming for nowhere and if you’re aiming for nowhere that’s where you’ll land.

To donate to Spencer’s mission: Donation 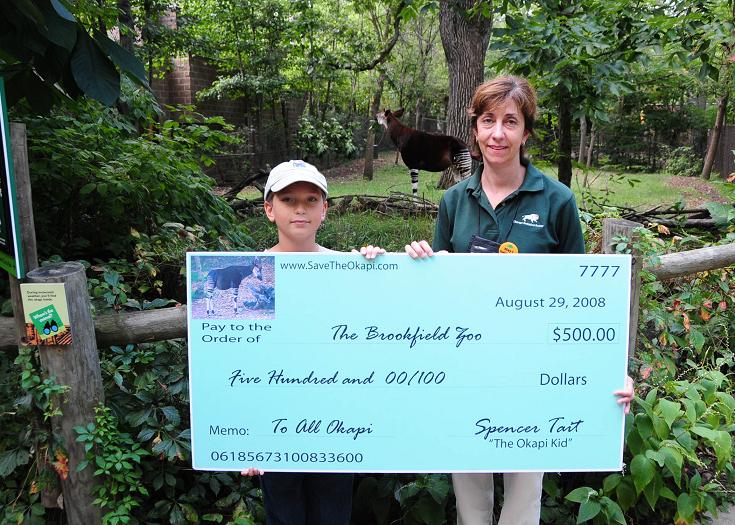 Spencer handing over 500 dollar donation to Brookfield Zoo staff. Photo courtesy of Save the Okapi. 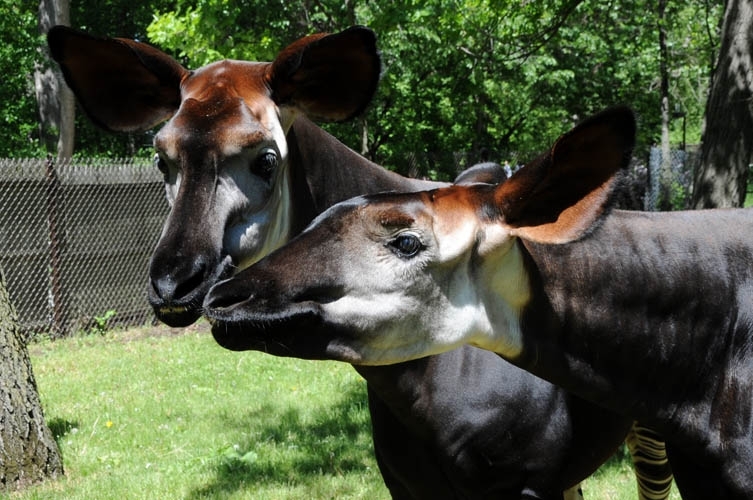 Brookfield Zoo okapis Semliki and Sauda. Photo courtesy of Save the Okapi. 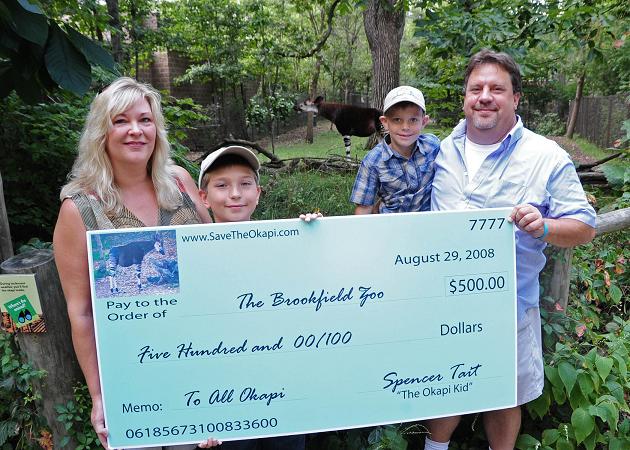 Spencer and his family with the 500 dollar donation for okapis. Photo courtesy of Save the Okapi.

(09/02/2009) The giraffe is one of Africa’s most recognizable animals, but its shy and elusive forest cousin, the okapi, was so little known that until just over a century ago the western world believed it was a mythical beast, an African unicorn. Today, a shroud of mystery still envelops the okapi, an animal that looks like a cross between a zebra, a donkey, and a giraffe. But what is known is cause for concern. Its habitat, long protected by its remoteness, was the site of horrific civil strife, with disease, famine, and conflict claiming untold numbers of Congolese over the past decade. Now, as a semblance of peace has settled over Democratic Republic of Congo (DRC), the okapi’s prospects have further dimmed, for its home is increasingly seen as a rich source of timber, minerals, and meat to help the war-torn country rebuild. In an effort to ensure that the okapi does not become a victim of economic recovery, the Okapi Conservation Project (OCP) is working to protect the okapi and its habitat. Founded by John Lukas in 1987, well before the conflict, OCP today manages the Okapi Wildlife Reserve, a 13,700-square-kilometer tract of wilderness in the Ituri Forest of northeastern DRC.

(07/27/2009) An okapi calf born this spring at the Bronx Zoo made its first public appearance, reports the Wildlife Conservation Society.

Rare okapi photographed for the first time in Congo park

(09/10/2008) A camera trap has captured the first-ever photo of an okapi in the Democratic Republic of Congo’s Virunga National Park. The picture shows that the elusive forest giraffe has managed to survive more than a decade of war in and around the park.

The Congo rain forest, an overview of a threatened ecosystem

(06/05/2005) Known as the heart of darkness by Joseph Conrad, the Congo region has long conjured up thoughts of pygmies, mythical beasts, dreadful plagues, and cannibals. It is a land made famous by the adventures of Stanley and Livingstone and known as a place of brutality and violence for its past — the days of the Arab slave and ivory trade, its long history of tribal warfare — and its present — the ethnic violence and massacres of today.

Okapi, other wildlife saved in the Congo by forest protector

(04/21/2005) Corneille Ewango of the Wildlife conservation Society today received the prestigious Goldman Environmental Prize for risking his life helping to protect one of Africa’s environmental gems—the Okapi Faunal Reserve—from the depredations of rebel militias in the wartorn region of the eastern Democratic Republic of Congo.