Brazil is trying to put a stop to deforestation…for good Pará is a state in Brazil. It is about the size of California and is covered in rainforest.

Pará has lost more rainforest in the past 15 years than any other state in the world. But the situation is changing. Simao (“Simon” in Portuguese) Jatene, the governor has committed to stopping deforestation by 2020.

Now other states in Brazil and other countries in the world are looking to Pará as an example of how they can reduce deforestation.

Governor Jatene says he is committed to ending deforestation because it’s something the public wants.

People understand that it is in their best interest to stop deforestation, the issue at hand is to figure out the best way to do it.

The governor believes that the best way to stop deforestation is to build the ability of small, local communities to manage their land and make responsible choices that are good for the environment.  He believes that heavy regulation from the government is not the answer.  The work and support has to come from the people themselves.

Jatene believes that giving the responsibility to local groups gives them an opportunity to make things work for their specific region and set of environmental conditions.

A program was formed, the CAR, which encourages land owners to register their properties and land activities.  This makes it possible for land and property owners to be accounted for, to make a structured system of land management, and to better manage and account for the buying and selling of agricultural products.

In addition to registering their land, land owners must also make a plan for re-foresting land that has been illegally cleared.  Land owners who do not follow these rules are punished.

People can benefit from being part of the CAR by gaining access to resources, getting help with building infrastructure, and improving the condition of roads so producers can get their goods to market.

The governor also believes that there needs to be an increase in education and training for local people for jobs and industries that are not related to deforestation.

Other countries are seeing Pará’s success and using it as a model to change their deforestation practices.

People have realized the importance of healthy forests.  They know that there are many things we can get from forests besides trees like clean air and water, fruit, and medicinal plants.

They are depending on local governments for resources and education to support an end to deforestation in Brazil. 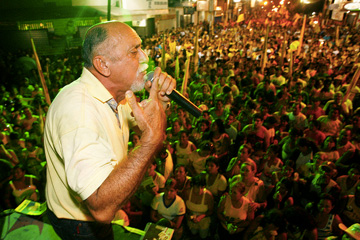 Governor Jatene at a public rally