Climate change to hurt children most

Children will bear the brunt of the impact of climate change because of their increased risk of health problems, malnutrition and migration, according to a new study published on Monday. And food prices are likely to soar as a result of warming, undoing the progress made in combating world hunger.

The findings are published as scientists began meeting in Stockholm to produce the most comprehensive assessment yet of our knowledge of climate change. Over the next five days, the Intergovernmental Panel on Climate Change, bringing together the world’s leading experts, will thrash out the final details of a message to the world’s governments.

They are expected to warn that climate change is almost certainly caused by human actions, and that it will lead to a global temperature rise likely to top 2C, with related effects including the shrinking of the Arctic ice cap and glaciers, a rise in sea level by nearly 1 meter by the end of this century and more extreme rainfall in parts of the globe.

Unicef argues that, although children are more vulnerable to the effects of global warming, they have been largely left out of the debate. “We are hurtling towards a future where the gains being made for the world’s children are threatened and their health, wellbeing, livelihoods and survival are compromised…despite being the least responsible for the causes,” said David Bull, Unicef’s UK executive director. “We need to listen to them.”

Children born last year will come of age in 2030, by which time the effects of climate change in the form of an increase in droughts, floods and storms are likely to be more in evidence. In the 10 most vulnerable countries, including Bangladesh, India and the Philippines, there are 620 million children under 18.

Unicef estimates that 25 million more children will suffer malnourishment because of climate change, with a further 100 million suffering food insecurity, where they and their families are on the verge of running out. Children among the 150-200 million people estimated to have to flee their homes because of climate change will suffer more than adults because of their relative lack of resources and higher vulnerability to disease. In heatwaves, likely to grow more intense and frequent under climate change, babies and small children are more likely to die or suffer heatstroke because they find it difficult to regulate their body heat. 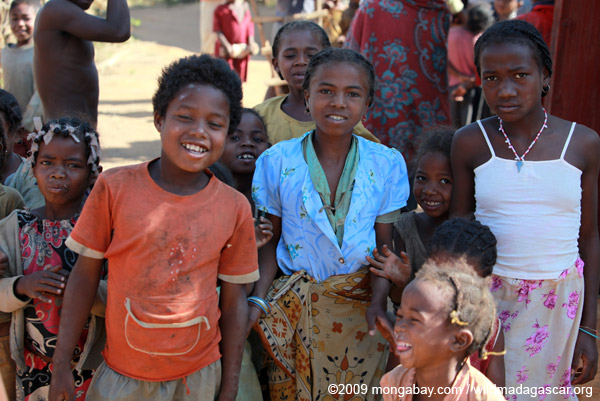 Kids in a Tsaranoro Valley village, Madagsacar. Photo by: Rhett A. Butler.

Separately, a report by Oxfam warned that global warming would cause rapid rises in food prices, causing severe consequences in poor countries. In pointed contrast to climate skeptics, who have seized on some of the areas of uncertainty in the IPCC assessment to claim that global warming is a far-off and minor problem, Oxfam listed recent examples of extreme weather that have caused food shortages and raised prices, quoting scientific estimates that these are likely to increase in number as warming continues. “Today one person in eight goes to bed hungry. Analysis suggests that the number of people at risk of hunger is projected to increase by 10-20% by 2050 as a result of climate change,” the study found.

The authors cited the 2012 drought in Russia, which cut the grain harvest by a quarter, resulting in grain and bread prices rocketing and many farmers falling into serious debt and hardship. The same year, the worst drought in 50 years in the mid-west of the US cut maize yields by a quarter, leading to a 40% rise in prices. Two years before, the devastating Pakistan floods destroyed 570,000 hectares of crops, and 80% of food stored was lost in some areas.

Oxfam also cites a study that suggested the 2011 drought in East Africa and famine in Somalia were made more likely by climate change. One of the problems with estimating the future effects of warming is that natural events such as storms, floods and droughts happen anyway and it is hard to blame particular occurrences on global warming. On this, the panel is expected to say on Friday that extreme weather effects are more likely because of climate change but will stop well short of attributing specific events solely to climate change.

Tim Gore from Oxfam said: “We want a world in which everyone enjoys the right to affordable and nutritious food, and we cannot allow climate change to throw us off course. Leaders listening to the latest findings from climate scientists this week must remember that a hot world is a hungry world. They must take urgent action to slash emissions and direct more resources to building a sustainable food system.”

Climate change could kill off Andean cloud forests, home to thousands of species found nowhere else

(09/18/2013) One of the richest ecosystems on the planet may not survive a hotter climate without human help, according to a sobering new paper in the open source journal PLoS ONE. Although little-studied compared to lowland rainforests, the cloud forests of the Andes are known to harbor explosions of life, including thousands of species found nowhere else. Many of these species—from airy ferns to beautiful orchids to tiny frogs—thrive in small ranges that are temperature-dependent. But what happens when the climate heats up?

(09/18/2013) Sea ice cover in the Arctic shrank to one of its smallest extents on record this week, bringing forward the days of an entirely ice-free Arctic during the summer. The annual sea ice minimum of 5,099m sq km reached on 13 September was not as extreme as last year, when the collapse of sea ice cover broke all previous records.

(09/17/2013) Scientists will call for a major push this week to reduce the amount of greenhouse gas emissions from agriculture through the use of a modified tropical grass. Brachiaria grasses have been found to inhibit the release of nitrous oxide, which has a more powerful warming effect than carbon dioxide or methane, leading them to be called a super grass.

Which ecosystems are most vulnerable to climate change?

(09/16/2013) New research highlights the world’s most (and least) vulnerable ecosystems to climate change. The study, published in Nature Climate Change, is the first to combine anticipated climatic impacts with how degraded the ecosystem is due to human impacts, creating what scientists hope is a more accurate list of vulnerable regions. The most endangered regions include southern and southeast Asia, western and central Europe, eastern South America, and southern Australia.