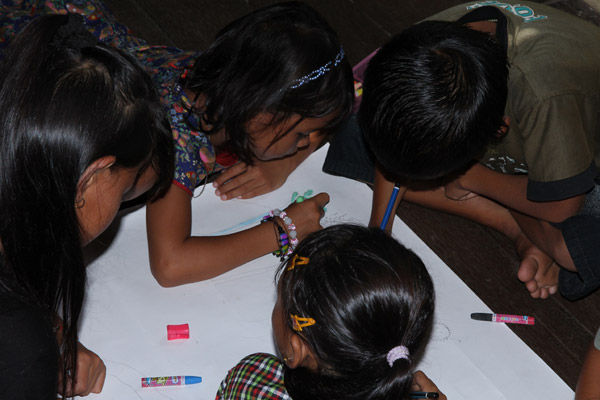 A generation ago, Borneo was one of the wildest places on the planet, a stronghold for species like orangutan, pygmy elephants, Sumatran rhinos, and clouded leopards among tens-of-thousands of other. But decades of logging and oil palm plantations has changed the landscape of Borneo forever: in fact a recent study found that the island has lost 73 percent of its intact lowland forest and 30 percent of its total forest cover since 1973. In the face of this large-scale environmental destruction, a new study in PLOS ONE finds that Indonesian Borneo’s children have a pessimistic view of their future, predicting rising temperatures, wildlife declines, and continued destruction of the island’s great rainforests.

To determine how children in Borneo envisioned the future of their environment, researchers asked nearly 250 children from 22 villages across Kalimantan (Indonesian Borneo) to draw two pictures: one of the present state of their environment and the other of what it will look like in 15 years, when the children themselves would be adults.

“Across all villages, children predicted environmental conditions to worsen over the next 15 years,” lead author of the study, Anne-Sophie Pellier with the Center for International Forestry Research (CIFOR), told mongabay.com. In fact, the study found that the children predicted river quality deterioration, increased forest clearing, and expanding oil palm plantations among other ecological losses.

After drawing in groups, the children, generally aged between 10 and 15, were asked to explain their illustrations. According to a press release, common comments included: “The temperature of the air will become warmer, and there will be no trees to stop soil erosion and floods” and “wild animals will also become extinct because they are too often hunted by people who don’t take their responsibilities, and they’ll lose their home.”

During the activity, the researchers were very careful to make sure the opinions of the children were not influenced by others.

“We requested that…the teacher would not interact with the children, discuss their drawings or provide additional explanation,” the researchers write in the paper. “Also, no books or images were allowed for the activity, to ensure that we captured the children’s unbiased perceptions.”

The scientists were generally surprised at how knowledgable the children were about current trends in environmental destruction and degradation on the island. Not only did the children portray their environmental conditions as deteriorating, they also linked this to human activities and had good knowledge of the importance of ecosystem services.

They researchers were also impressed how little the children appeared to be swayed by “shifting baselines syndrome.” Shifting baselines, which was first described in 1995, is an increasingly-accepted theory that human beings constantly update their view of the environment over their lives and over generations. In other words, over time, society loses the “memory” of what pristine environments actually look like. For example, one generation’s view of pristine nature may in fact be a heavily-impacted secondary forest with few native species. Yet the children in the study did not appear under any illusions about the natural state of the environment.

“We had actually expected a stronger shifting baseline effect in which children would consider the present state of their environment as the ‘normal’ condition. This did not turn out to be the case,” said co-author Erik Meijaard, a founder of the Borneo Future Initiative. “Children in Kalimantan seem to have a clear understanding of past, present and future trends in their environment, which matched our independent assessments of environmental change.”

The children’s impressive knowledge of their environment likely came from a variety of sources, according to Pellier, yet more research is needed on this. 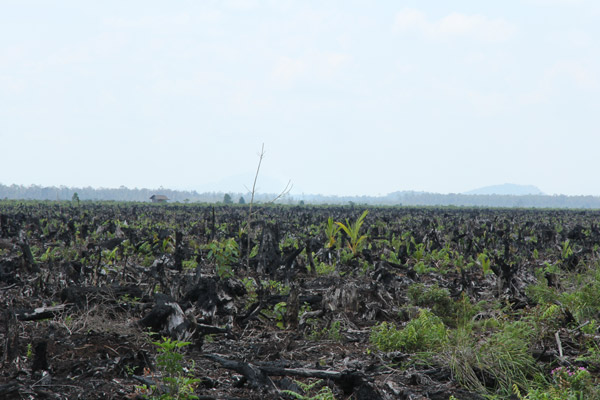 “Media and literature, especially through images, may deliver a powerful message to young people to understanding social, economic and environmental trends,” she said, adding that “children living in the most remote areas may have lower access to media than have children in degraded landscapes, but benefit from their permanent interactions with forests, especially if their communities depend largely on natural resources. Children may also learn from attending village meetings where land use management is discussed.”

While all the children’s drawings showed worsening environmental conditions from the present to 15 years in the future–around 2030–some children envisioned greater destruction than others. In fact, children still living in intact forests predicted the least amount of environmental destruction, while those residing in villages in already degraded landscapes saw conditions worsening considerably.

Although the children in the study aren’t able to vote yet, the scientists hope politicians and policy-maker will not ignore these findings.

“We want to use the fact that children in Kalimantan are very concerned about the state of their environment…to influence political thinking. Governments cannot keep on making top-down land use decisions that are mostly informed by economic considerations, but ignore social and environmental impacts,” Meijaard said, adding that “there is significant emotional appeal to understanding what children think, and this emotional angle is harder to ignore.”

Pellier noted that the study had ethical implications for leaders as well.

“Children have on average the longest lives ahead of them and the greatest stake in tackling environmental problems to ensure natural resources sustainability. We should listen to them.”

Both Meijaard and Pellier says that the recent election of a new Indonesian President, Joko Widodo, may mean change is in the air for Kalimantan’s forests as well as other forests across Indonesia.

“With the choice for a liberal thinking, people-oriented, and democratic president, the majority Indonesia’s people have indicated that they desire a voice in determining their future,” noted Meijaard.

The researchers write that the next step for Indonesia to prove to these children that the future doesn’t have to be worse.

“It is essential to develop approaches to show these children that past trends do not necessarily determine future trends,” the researchers write, “and that positive changes are possible if development actively considers biodiversity and dependence of communities on ecosystem services.”

Meijaard added that the study showed that “children actually care about the state of their environment,” and that “willingness to change starts with understanding what is going on.” 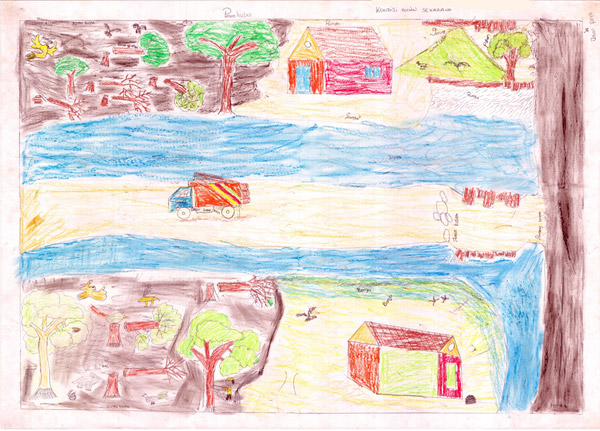 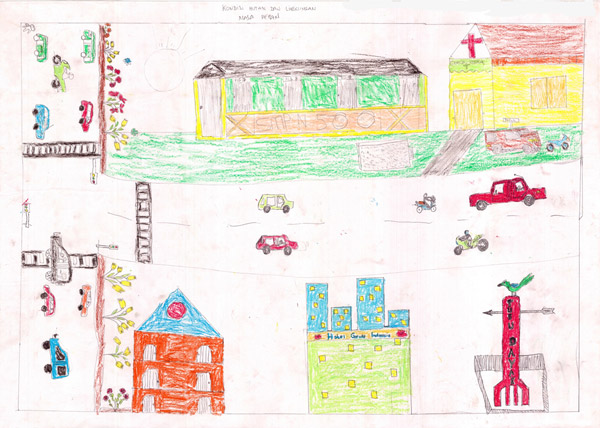 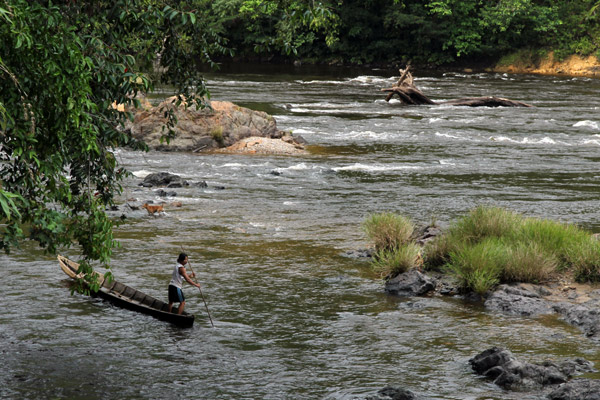 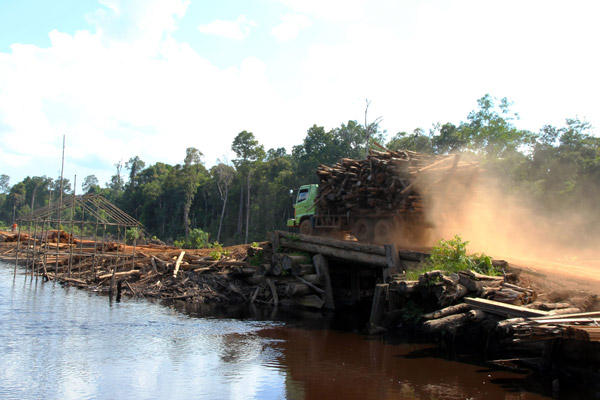 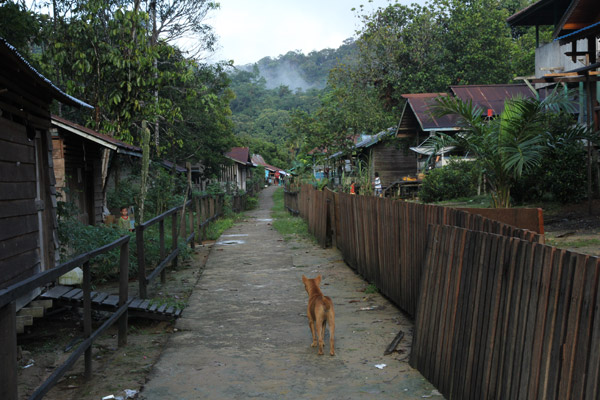 (08/06/2014) The Environment Ministry of Sintang Regency, West Kalimantan, Indonesia declared that the water in many rivers and lakes is unsuitable for consumption due to high levels of pollution.

30% of Borneo’s rainforests destroyed since 1973

(07/16/2014) More than 30 percent of Borneo’s rainforests have been destroyed over the past forty years due to fires, industrial logging, and the spread of plantations, finds a new study that provides the most comprehensive analysis of the island’s forest cover to date. The research, published in the open-access journal PLOS ONE, shows that just over a quarter of Borneo’s lowland forests remain intact.

(07/16/2014) Forest loss is on the rise in Borneo, according to data from a team of researchers led Matt Hansen of the University of Maryland. The study, published last November in the journal Science, now underpins Global Forest Watch, a worldwide forest mapping platform.

(06/30/2014) Oil palm plantations are not only encroaching on forests, they are also degrading water quality, finds a new study published in the Journal of Geophysical Research: Biogeosciences.

(06/29/2014) Despite a high-level pledge to combat deforestation and a nationwide moratorium on new logging and plantation concessions, deforestation has continued to rise in Indonesia, according to a new study published in Nature Climate Change. Annual forest loss in the southeast Asian nation is now the highest in the world, exceeding even Brazil.

(06/26/2014) Just over a year ago, the Indonesian government officially approved the country’s first REDD+ forest carbon conservation project: Rimba Raya, which aims to protect more than 64,000 hectares of peat forest in Central Kalimantan. The approval came after years of delays from the Ministry of Forestry and a substantial reduction in the project’s concession area. But InfiniteEarth, the firm behind the project, pressed on. Now a year later, Rimba Raya’s is not only still in business, but is scaling up its operations.

(06/23/2014) A Wilmar supplier is allegedly destroying orangutan habitat in Indonesian Borneo, potentially putting it in breach of the plantation giant’s zero deforestation policy, reports Greenomics. According to analysis of satellite data by Greenomics, PT Sumatera Jaya Agro Lestari (SJAL) has cleared an area of forest that is classified as orangutan habitat.

(08/11/2014) Oil palm plantations and other developments are threatening Rawa Singkil Wildlife Preserve—Aceh’s largest peat swamp, and home to the densest population of Sumatran orangutan in the Leuser Ecosystem. The lack of clear boundaries, and construction of roads bisecting the area has fostered encroachment by local and outside entrepreneurs, including some former local officials, reports Abu Hanifah Lubis, Program Manager of Yayasan Leuser Internasional (YLI).

(08/04/2014) Belitung, a picturesque island off the east coast of Sumatra, has experienced an uptick in tourism recently due to its unspoiled white sand beaches and turquoise waters. But next to all of the beauty, an environmental tragedy is quietly unfolding: the island’s primary forests are being cut down at an alarming rate in favor of mining and palm oil plantations.

(07/31/2014) The Leuser Ecosystem in Aceh, Indonesia is gaining the attention of international animal traffickers, according to the Leuser Conservation Forum (FKL). From the beginning of 2013, FKL patrols have dismantled 282 makeshift traps targeting high value threatened species, and the situation is getting worse.

(07/29/2014) An Indonesian Stock Exchange-listed company whose commissioner is a member of The Nature Conservancy-Indonesia’s board has been clearing dense rainforest in New Guinea, finds a new report from Greenomics-Indonesia. The report is based on analysis of data from Global Forest Watch, NASA satellites, Indonesia’s Ministry of Forestry, and company documents.