Counting elephants from the air: the Great Elephant Census and why it counts

Nobody is sure how many elephants there are in Africa.

Elephants are also very good at hiding from people. They can virtually disappear into thickets of savanna woodland or slip deep into impenetrable rainforest. This skill has served them well over their history with humans. African elephants and humans evolved in the same areas and have encountered each other throughout their history. African elephants learned how to avoid people and hide from them.

Their cousins, the mammoths, mastodons, stegodons, and gomphotheres, who used to live in North and South America, Europe, and most parts of Asia did not have much experience with humans until people left Africa and spread across the rest of the world. The lack of experience with humans may have been why these elephant cousins did not recognize humans as a potential threat. These elephant cousin species were hunted to extinction about 10,000 years ago, along with many other species of large mammals like ground sloths, saber-toothed cats, and wooly rhinos.

With a vast geographic area to survey, and with an animal that can very well hide itself if it doesn’t want to be seen (even though it is the largest living land animal), people who want to know how many elephants there are in Africa have had a very difficult time.

One thing that is clear is that over the 20th century there became increasingly fewer elephants in Africa. Scientists estimate that there were more than a million elephants in Africa in the first part of the 20th century. By the start of the 21st century there were likely only 500,000 or fewer elephants in Africa. The main reason for the decline in elephant numbers is poaching for their ivory. In the 1970s and 1980s there was a major epidemic of elephant poaching across Africa. This ivory poaching crisis was halted in 1989 when the ivory trade was banned under the international agreement called CITES, the Convention on International Trade in Endangered Species. After the ban, elephant numbers rose across Africa.

Limited ivory trade was again allowed in the early 21st century when some countries claimed that there was enough ivory stockpiled from natural elephant deaths. Unfortunately this trade was not controlled as was planned and poaching of elephants resumed. Scientists estimated that upwards of 20,000 elephants a year were being illegally killed for their ivory by 2013. This rate of elephant killing could eventually lead to elephant extinction in many parts of Africa if not stopped. Critical pieces of information needed to protect elephants include knowing how many elephants there are in their habitats across Africa, and what other things are threatening their survival. Ivory poaching is the major obvious threat to elephant populations, but illegal logging and development of their habitat is also a threat in many places. Wildlife authorities in Africa need to how many elephants there are and what threatens them in the areas they protect.

A team of scientists has undertaken the massive task of counting African savanna elephants across the entire continent of Africa, a project called the Great Elephant Census, funded by Microsoft co-founder, Paul G. Allen. Dr. Mike Chase and Kelly Landen of the elephant conservation group Elephants Without Borders are coordinating the Great Elephant Census, working with a team of scientists and wildlife authorities from government agencies and conservation groups across Africa. They are counting elephants in 17 countries. According to experts on elephant estimates, the targeted 17 countries account for approximately 90 percent of the continent’s savannah elephants.

The elephant census team is counting elephants and other wildlife within elephant habitats in the countries being surveyed. The survey plane flies low to the ground methodically over an area in a planned grid pattern. Flying back and forth like this ensures that an entire area is systematically searched for the presence of elephants.

“When we see animals, we count and call out the numbers in the herds and which species. At the same time, photos of all of the herds are taken by remotely controlled cameras attached to the plane to verify what was seen. Then we recount the herds in the photos on the computer,” says Kelly. 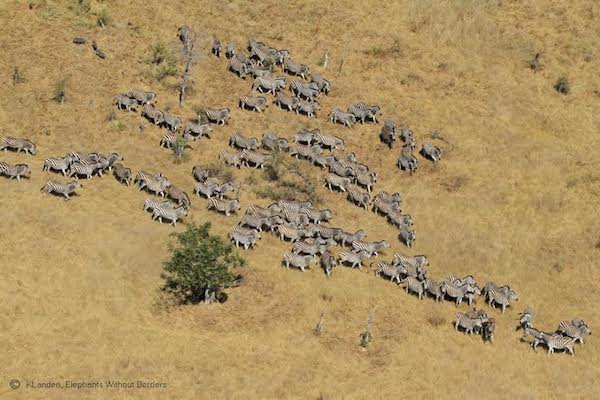 A herd of zebra spotted from the plane. Photo courtesy of Kelly Landen.

The surveys are done during the dry season, which varies depending on the country. This is because in the dry season there is less vegetation for the elephants to hide in and it is easier to see them.

In addition, the aerial census allows the team to count other large herbivores living in the same area as elephants like giraffes, zebras, and antelope species. They can also assess the environmental conditions of elephant habitat, such as whether people are cutting down trees, building roads, grazing livestock, or turning elephant habitat into farms or other human developments.

The aerial census not only will give a count of the numbers of savanna elephants across their range in Africa, but also allow the detection and counting of specific threats like poaching and different types of habitat destruction.

As of October 2014, the Great Elephant Census had surveyed elephants in Kenya, Tanzania, Ethiopia, Chad, Democratic Republic of Congo, Mozambique, Uganda, Zimbabwe, and recently Botswana. The census has shown the scientists both negative and positive trends for elephant conservation.

Unfortunately, poaching is only part of the problem, with the census exposing environmental degradation is a key factor in wildlife declines. “Loss of habitat is the biggest conservation problem for elephants and other wildlife, in many areas. People are also taking over land into protected areas much more than was previously thought,” explains Kelly.

On the positive side, in some areas anti-poaching efforts seem to be effective as the only elephant carcasses seen are old skeletons. The absence of newer elephant bodies means that poaching may have stopped in these areas. The aerial census has also found elephant herds in some areas where they were thought to be extinct. 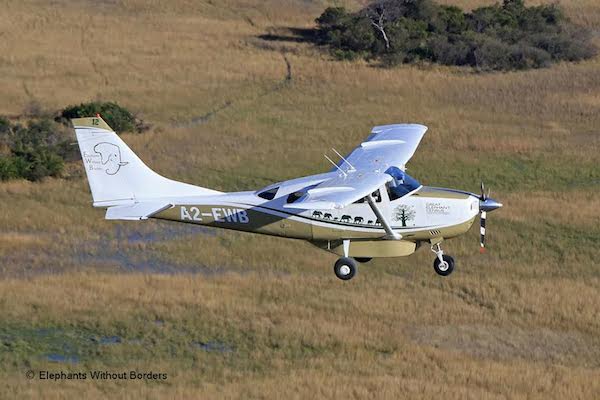 The goal of the Great Elephant Census is not only to count elephants and other wildlife, but also to assess the impact of poaching and threats to their habitat and make the information useful to the conservation authorities in each country where the census is occurring. Mike, Kelly, and their colleagues meet with the wildlife departments and scientists in each country to review the findings of the census. In these meetings they assess the conservation problems (and hopefully good news, too) that the aerial censuses reveal about elephant numbers and their conservation challenges.

“The elephant is a flagship or what is called a keystone species – they play a key role in maintaining the balance of all other species in their environment. They are a lynchpin to Africa’s ecosystem and losing them would be a detriment to other species and our planet. Elephants are symbolic of our commitment to conservation in Africa. If we can’t save the African elephant, what is the hope of conserving the rest of Africa’s wildlife? I am hopeful with the right tools, research, conservation efforts and political will we can help conserve elephants for decades to come,” says Mike.

What can people who do not live in countries where elephants live do to help conserve them? Kelly recommends that people can help by keeping aware of how elephants are doing in Africa and helping others keep aware. She observes that young people have helped spread awareness of the elephant poaching crisis by creating social networks and that has been helpful in keeping elephant conservation relevant in the world, especially among the young people who will decide whether elephant populations remain in Africa for this century and beyond.

“The survey data is still being gathered and it will take months for the results to be distributed. However, the Great Elephant Census will create a baseline of novel and meaningful information that will benefit conservation efforts and is critical to the future of African elephants’ survival. It has been an honor and privilege to be part of it,” says Kelly.