Deforestation: What happens when a forest is cut down? [Grade 2]

This is a rainforest on the island of Borneo in the country of Malaysia. It is home to more than 4,500 species of plants and animals. Here are just three. 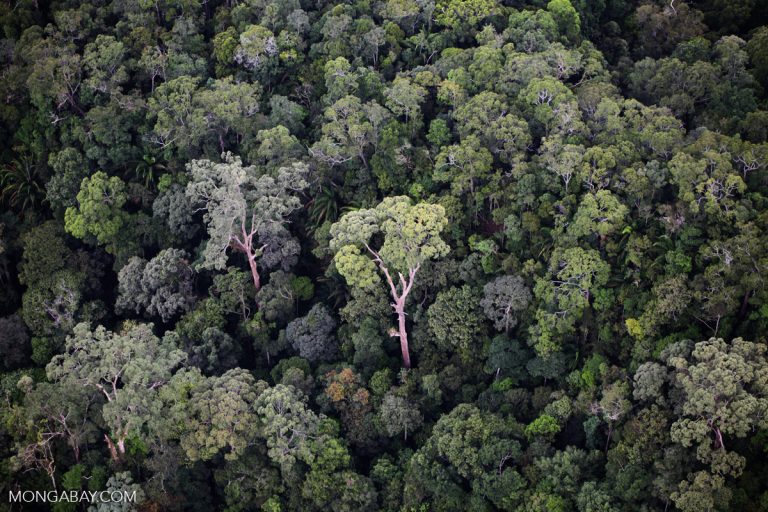 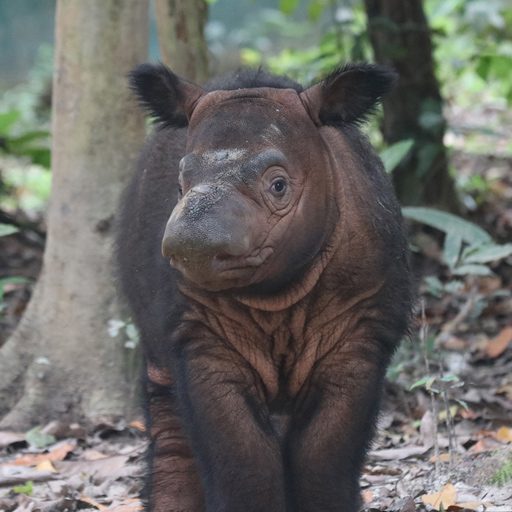 This is a baby Sumatran Rhino. It lives in the rainforest.

The rhinos live alone except during mating and while the mama rhino is rearing her offspring. Rhinos like to wallow in mud baths in the rainforest during the hot day. The mud baths keep them cool and their skin healthy.

Rhinos eat at dawn and at dusk. They like young saplings, leaves, twigs, and shoots. One rhino can eat about 50 kilograms (110 pounds) of food a day. 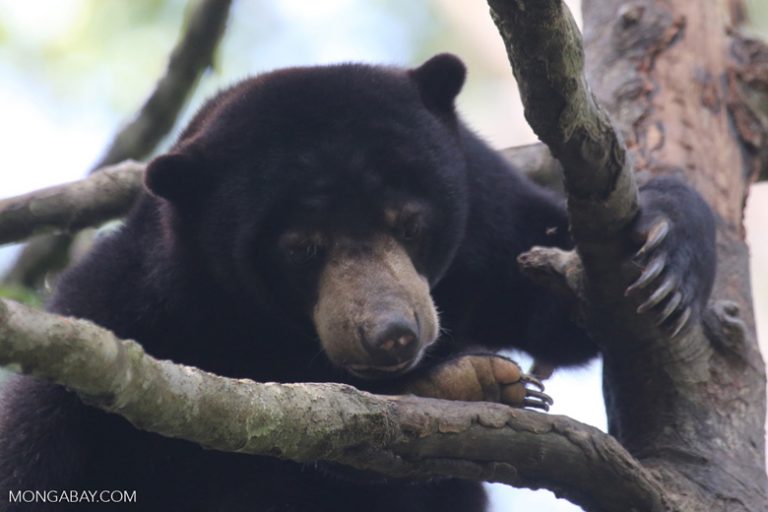 This is a sun bear. It also lives in Malaysian rainforests.

It is the smallest of all the bears. It has long curved claws and a very long tongue, which help it to reach inside trees for insects and honey. They eat insects, worms, larvae and a large amount of fruits. Their long claws and hairless paws help them climb trees. They sleep in hollow logs usually at night. Sun bears are diurnal. Sun Bears do not hibernate. 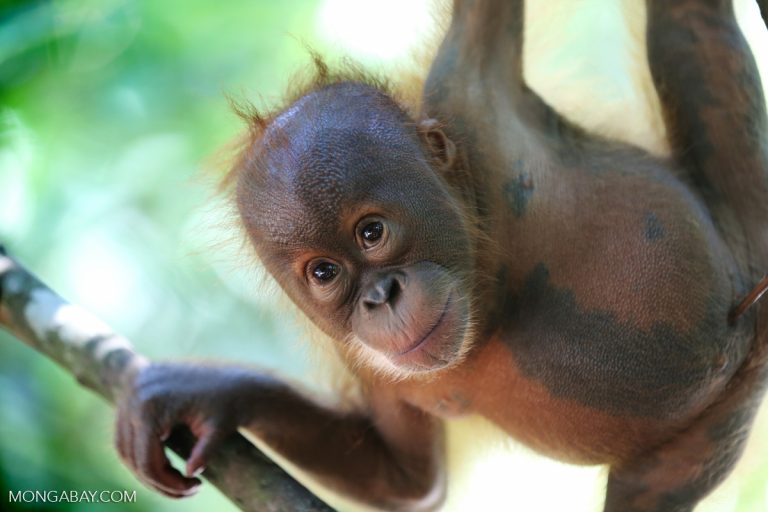 The name orangutan means forest person. It is a good name for this animal.

The orangutan lives only in the rainforests of Borneo and Sumatra.

Orangutans travel by swinging from tree to tree. 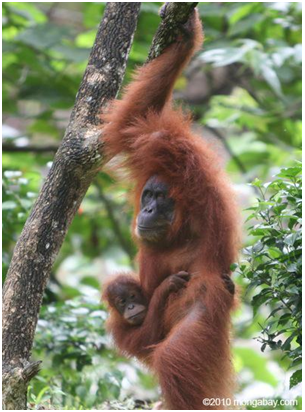 At night orangutans use branches and leaves to make themselves a bed high in the trees. This helps to keep them safe while they sleep.

Baby orangutans stay with their mother for years. They can live in a small group, which can include mother, baby, aunts and cousins. Adult males live alone.

Orangutans help the forest by dispersing the seeds of the fruit they eat. After a fruit is eaten the seeds come out in the animal’s poop. Then new fruit trees grow.

Where is this rainforest?

These three species and thousands more live in the Sabah region of Malaysia. It is outlined on the map in red.

Here it is again on a bigger map. It is near the equator in the Pacific Ocean. The area just north and south of the equator is also called the tropics. This is where rainforests can grow. It is hot enough here for plants to grow all year round. It is a small place, which is home to many species of plants and animals. One small area of rainforest gives homes to thousands of different species. It is very valuable.

The plants and animals thrive on the almost daily rainfall. These lush rainforests produce air for humans to breath. The soil and plants store carbon dioxide. Water is stored in rainforests and circulated back into the atmosphere as rain. Rainforests help to regulate weather around the entire planet.

Crops also grow well here. Because plants grow so well there are many people who want to cut down rainforests to grow crops to sell. The rainforests in this area of the world make up 20% or one fifth of all the rainforests on our planet.

Cutting down trees and clearing plants to use the land for something else is called deforestation. This picture was taken from an airplane flying over the rainforest. You can see large areas of rainforest have been removed.

Sometimes the trees are burned down. 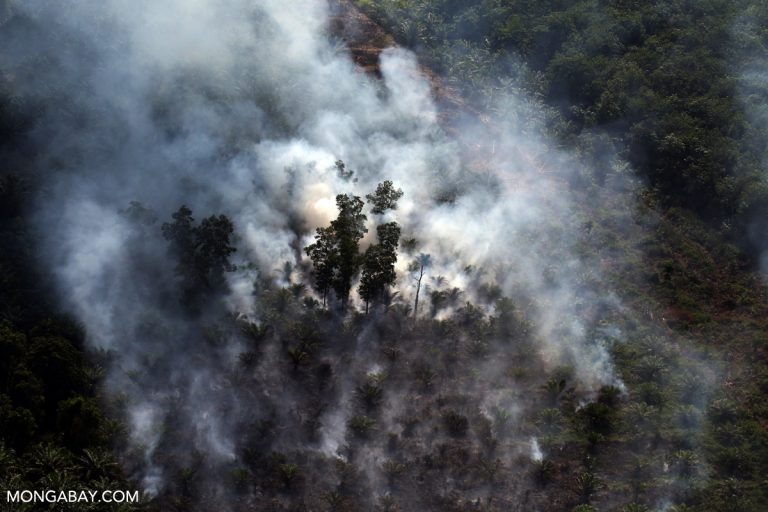 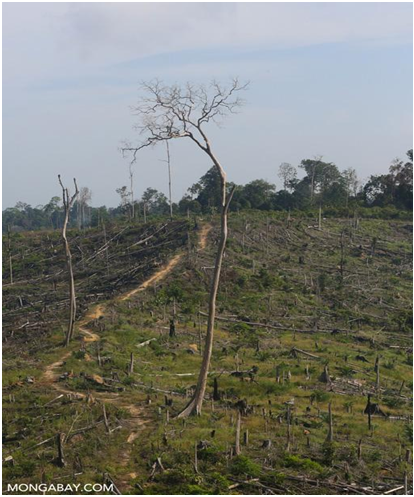 Sometimes the trees are cut down. The trees are sold as timber. The timber is used to build houses or furniture.

The cleared land is used for plantations or large farms. This is an oil palm estate in Sabah, Malaysia. 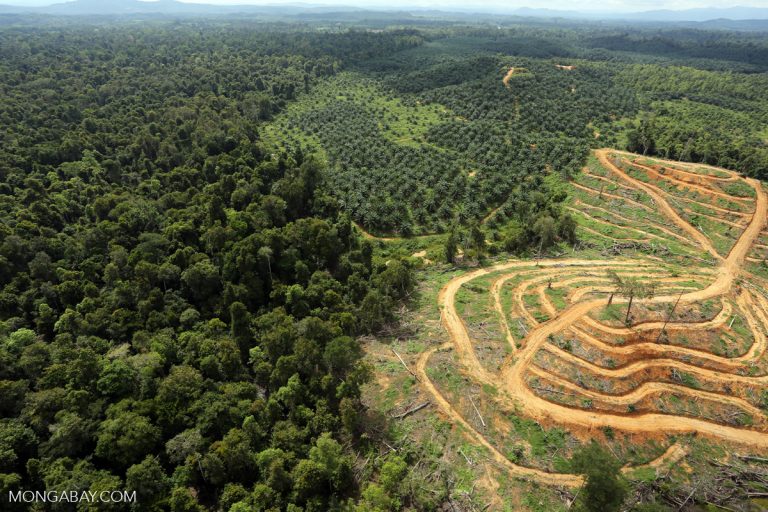 Here is a rainforest before deforestation. 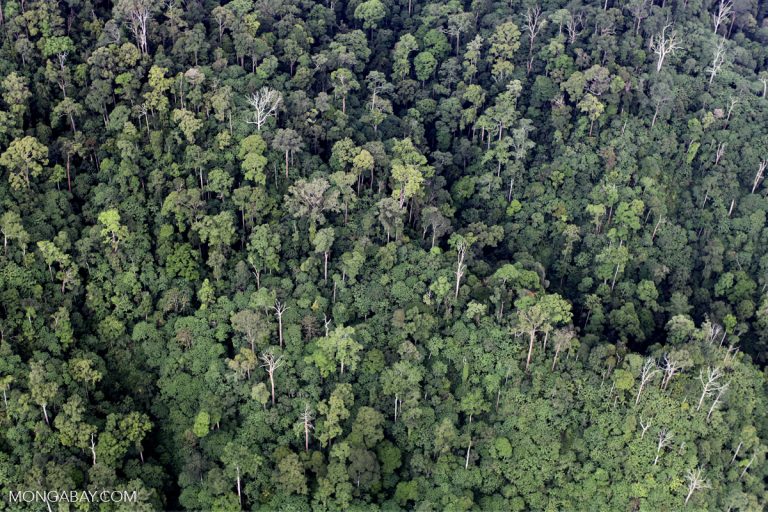 Borneo (n.) third largest island in the world and the largest in Asia

deforestation (n.) the act of clearing a large tract of trees.

disperse (v.) to distribute or spread over a wide area.

diurnal (adj.)  during the day.

equator (n.) an imaginary line drawn around the earth equally distant from both poles, dividing the earth into northern and southern hemispheres.

hibernation (n.) the period of time an animal or plant spends sleeping or dormant, usually in the winter.

offspring (n.) a person’s child or an animal’s young.

territory (n.) an area of land.

thrive (v.) to prosper or flourish, to grow or develop well.

wallow (v.) to roll about or relax in mud or water.

1. How do orangutans help the forest?

2. Where do tropical rainforests grow?

a) On every continent

b) Near the equator

3. Why do rainforests grow there? Pick two.

a)It is hot and humid.

b)It can rain every day.

c)There are many animals.

5. What do rainforests provide for our planet?